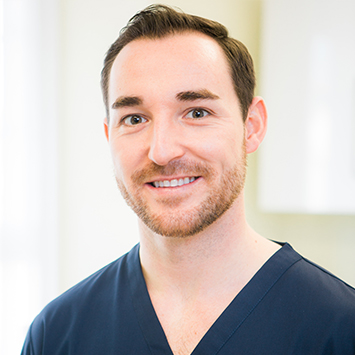 Born and raised in Swansea, Nick completed his dental undergraduate training at Cardiff University, gaining a BDS (Hons) in 2011.

He spent his foundation training and first few years in general practice in Carmarthenshire, before returning to Swansea in 2014 as an associate dentist. Since 2016, Nick has been a part-time clinical lecturer at Cardiff Dental School and is involved in preparing young dentists to transition into general practice.

In 2018 Nick joined the team as principal dentist at Mumbles Dental and Cosmetic Suite.

Nick has been active in progressing in his dental career since graduation. He has completed further training in restorative dentistry enabling him to provide high quality dental treatments. In 2016 he was granted membership into the Glasgow Royal College of Physicians & Surgeons.Nick has an interest in removable orthodontics and is a certified Inman Aligner, Clear Smile and Invisalign Go user, providing patients with the latest systems to straighten teeth. He has also trained in facial aesthetics at the Avanti Aesthetics Academy in Harley Street, and enjoys a loyal client base to which he provides anti-wrinkle treatments and skin care.

Nick creates a friendly, informal environment in his dental surgery where his patients feel comfortable. He places a strong focus on preventative dentistry and enjoys helping his patients achieve their dental goals through minimally invasive methods.

In his spare time Nick can often be seen supporting or performing in local theatre, or as a vocalist in fundraising events. He is also a keen follower of Welsh rugby.